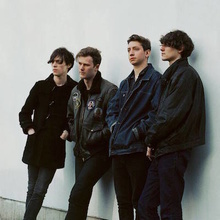 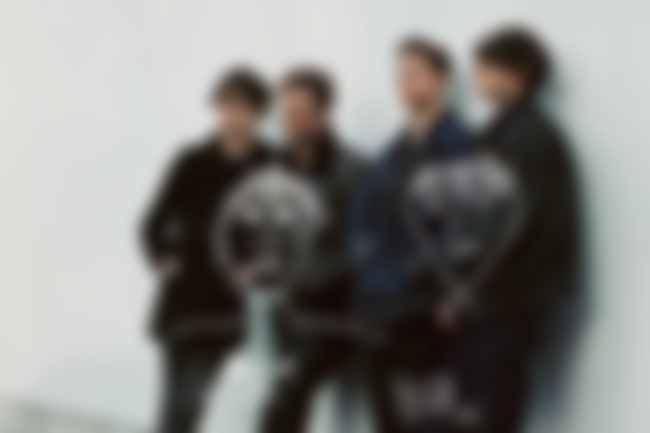 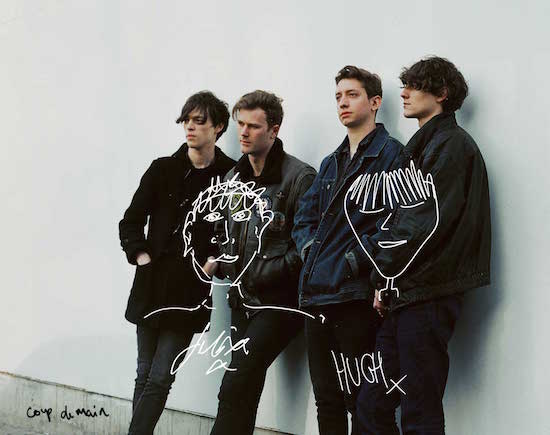 Earlier this year, Gengahr - i.e. the UK four-piece band; not to be confused with their namesake ghost-type Pokémon - set loose into the world one of 2015’s very best albums with their debut record, 'A Dream Outside'.

From their evocative lyrical short-stories, to the dreamy album cover (which was painted by the band’s own Hugh Schulte), Gengahr enthral on opening-song 'Dizzy Ghosts', and cast a spell so engrossing that you’ll find yourself reaching for the repeat button at the end of 'Trampoline'.

During their first trip to Australia recently as part of the 2015 line-up for Splendour In The Grass, Coup De Main talked songwriting and art with Gengzzz...

"I feel that it’s important that you do everything you can, because that’s what creates the identity of bands. The more you’re doing yourself, the stronger and the clearer that is..." 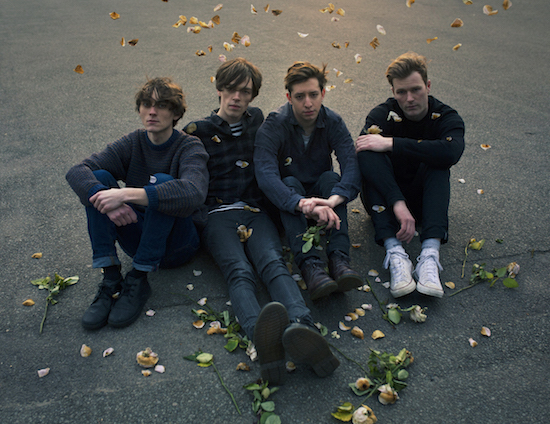 COUP DE MAIN: Your Sydney show last night was amazing! So, the most important question in the world right now is... when are Gengahr going to be coming over to visit us in New Zealand?
GENGAHR - HUGH SCHULTE: As soon as possible.
GENGAHR - FELIX BUSHE: Yeah, I mean, I think probably the boring answer is, when we have enough fans in New Zealand. We’re lucky we were able to do this trip - we’ve actually kind of had music out in Australia even longer than we’ve had it in the UK, kind of at radio. We’ve wanted to come over for a while, it’s been a kind of exciting process for us, but it’s a shame we’re only doing a couple of shows here - if it were up to us we’d do a lot more.
HUGH: Hopefully they’ll ask us back. And next time we come to Australia, then hopefully we’ll jump over to New Zealand too. It’s not far.
FELIX: It’s the same kind of distance as a lot of the other Australian flights anyway. If enough people wanna see us play anywhere, then we’ll go.

HOW I FEEL ABOUT BEING IN AUSTRALIA… 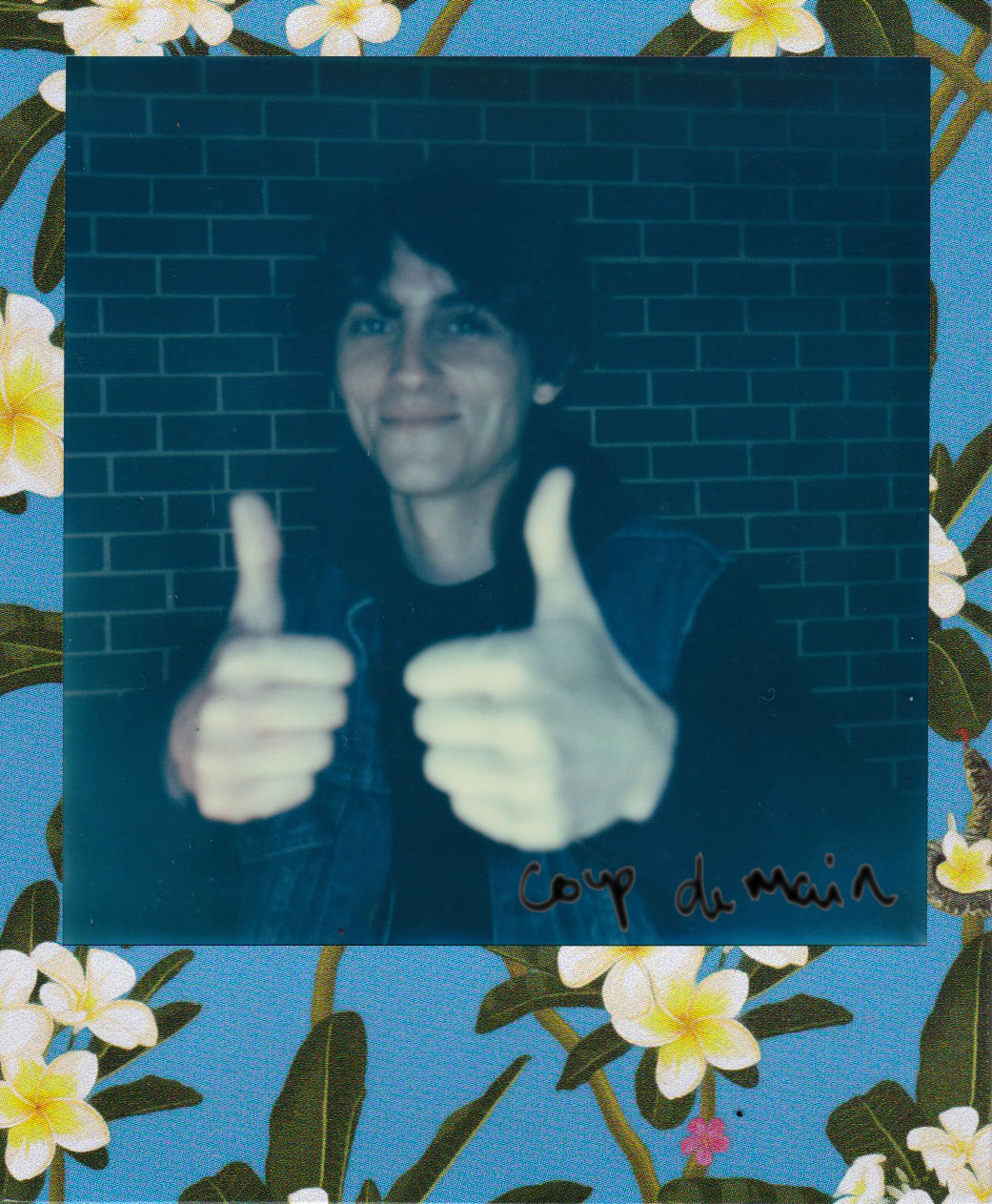 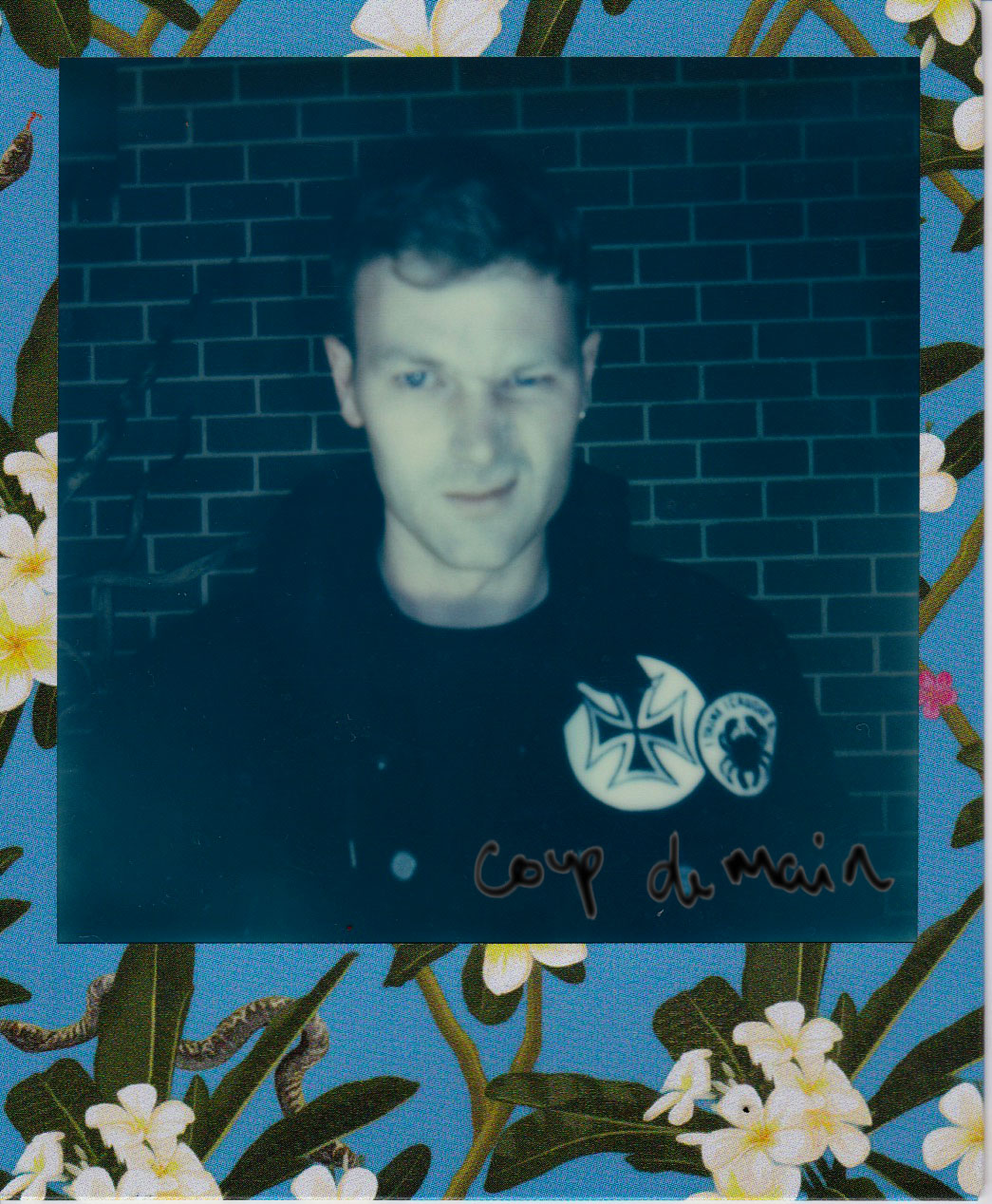 CDM: And in celebration of your great debut album, 'A Dream Outside’, we have brought you some lolly leis. We brought four, so you can choose to share with the rest of your band, or to keep them for yourselves.
FELIX + HUGH: No way!
HUGH: I’m gonna keep this with me for the next two days.
FELIX: Do we have to give these to the other guys?
HUGH: These are mine now.

CDM: How does your songwriting process work?
HUGH: It’s always different. Every song it’s quite collective, we always do it in the rehearsal rooms together, eventually. Someone will bring an idea, a set of chords, a lyric, a melody, a bass-line or whatever, and we’ll all just kind of try and make it work.
FELIX: Generally I’ll try and write the heart, and then we bring it to life as a band.

CDM: Do you write your lyrics specifically for the songs, or do you write poems or prose and then evolve them into song-form?
FELIX: Normally for the song. If I think I have a good idea, I might write it down and then try and make it into a song later. But yeah, I think mostly it’s a case of sitting down and playing through chords a lot and seeing what kind of vibe is with it. Often, if there’s something on your mind, you’ll probably end up putting it in a song. It’s all about process I think, you just have to do it. Sometimes it’s rubbish....
HUGH: Trial and error.
FELIX: Sometimes you have a good day, things seem to work out.

IF I HAD A DAY OFF IN NEW ZEALAND… 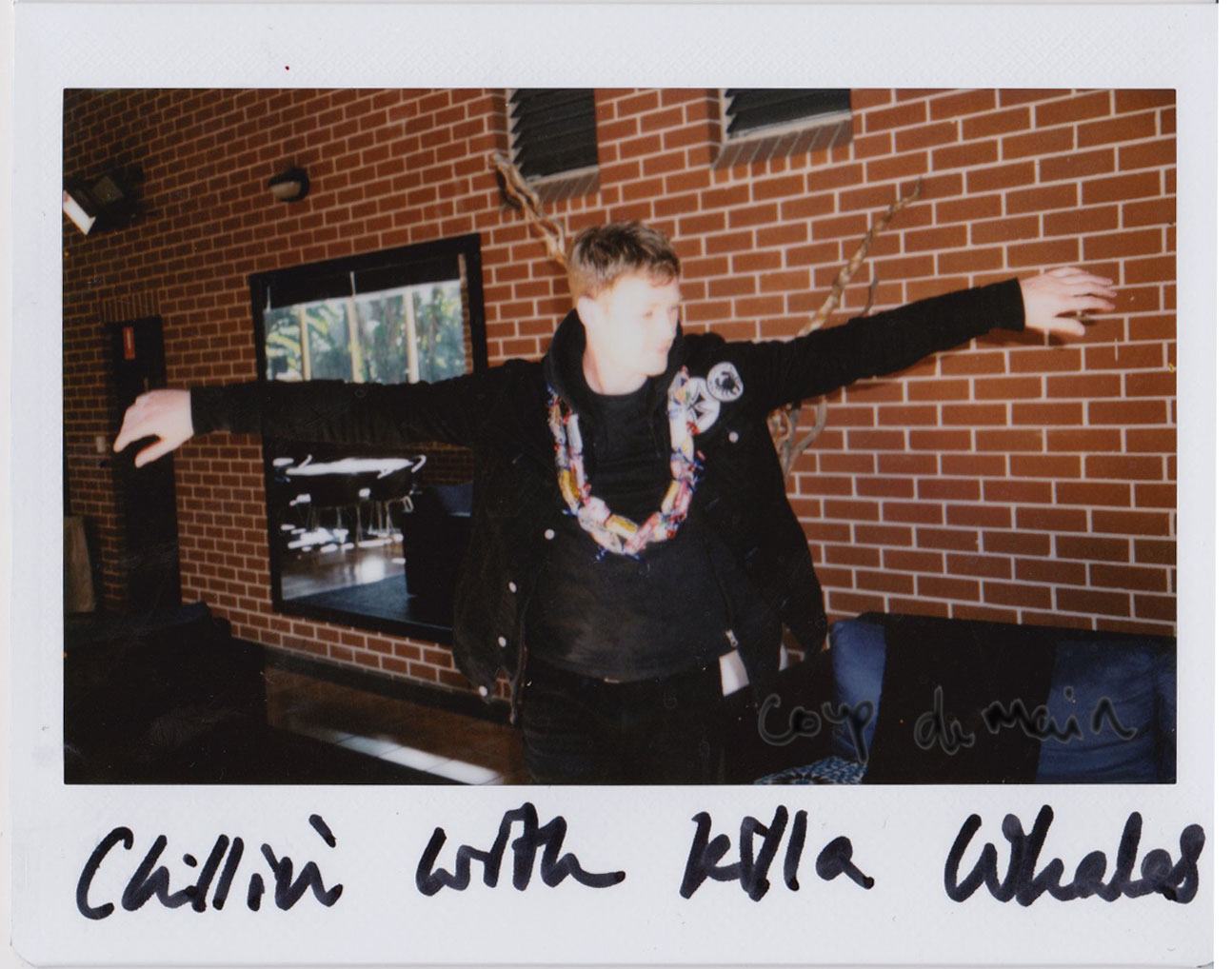 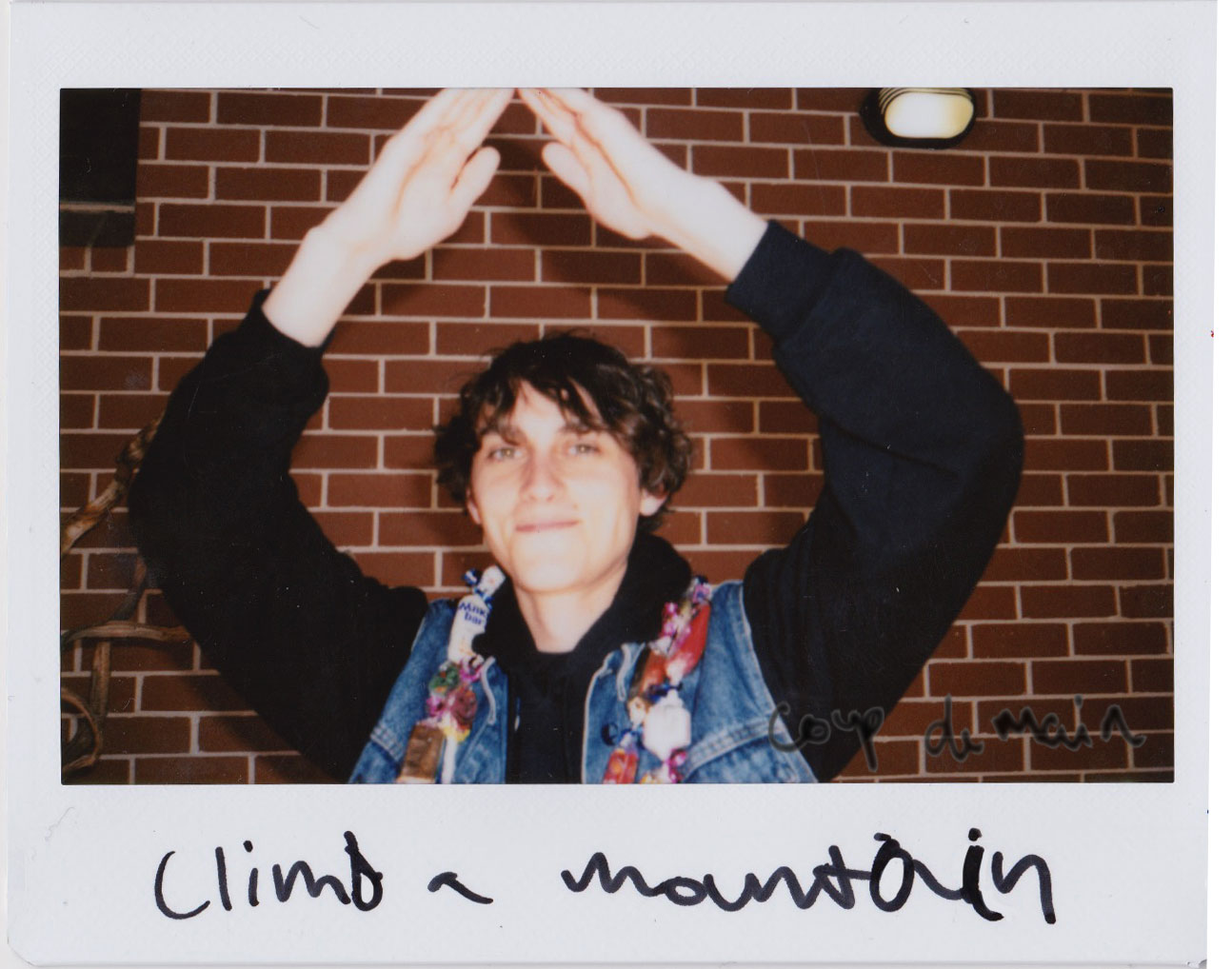 CDM: Felix, you write really beautiful metaphors - like, "I'm soft in the middle, melting away" - do you spend a lot of time carefully composing your words or do they just come to you naturally?
FELIX: I draft quite a lot. Normally like 9 or 10 times on a song, at least. I kind of come back to things I think, so I always try to improve. Even now, when I’m kind of performing or singing songs, I see things I could have maybe written better or made clearer. It’s a difficult one, ‘cuz once you record it, it’s finished. And that’s quite frustrating, ‘cuz I think things seem to evolve and change as they go along, and I think that’s quite nice.

CDM: Lyrically, what's your favourite Gengahr song?
FELIX: Mine is probably ‘Lonely As A Shark’.
HUGH: Yeah. It was one of our first songs we put together, so it’s got a special place in our hearts.
FELIX: I like them all, I think they’re all really good. <laughs> That is actually my favourite one, I think, lyrically maybe. It’s the saddest - maybe that just says something about me.

CDM: There are so many layers to your music, from the magical and mystical vibes in the lyrics, to the production and actual music. How do you know when a song is finished?
FELIX: It’s tough, and not all of us always agree when things are finished.
HUGH: No. If we’re still playing it after a few weeks, then it’s gonna be finished pretty soon. When it doesn’t work, we don’t finish it.
FELIX: It’s always the case, that if things are easy and fun, then they’re good. If it’s hard work and you’re trying to overthink things, then generally it’s probably worth just moving on and doing something else. All our best songs I think have been ones that have been effortless - just go play whatever you think you should play, then it sounds like a good song. At least that’s how it seems in hindsight; maybe it’s not that simple. Got my rose-tinted glasses on maybe. I think the good ones were easy, it shouldn’t be hard work. 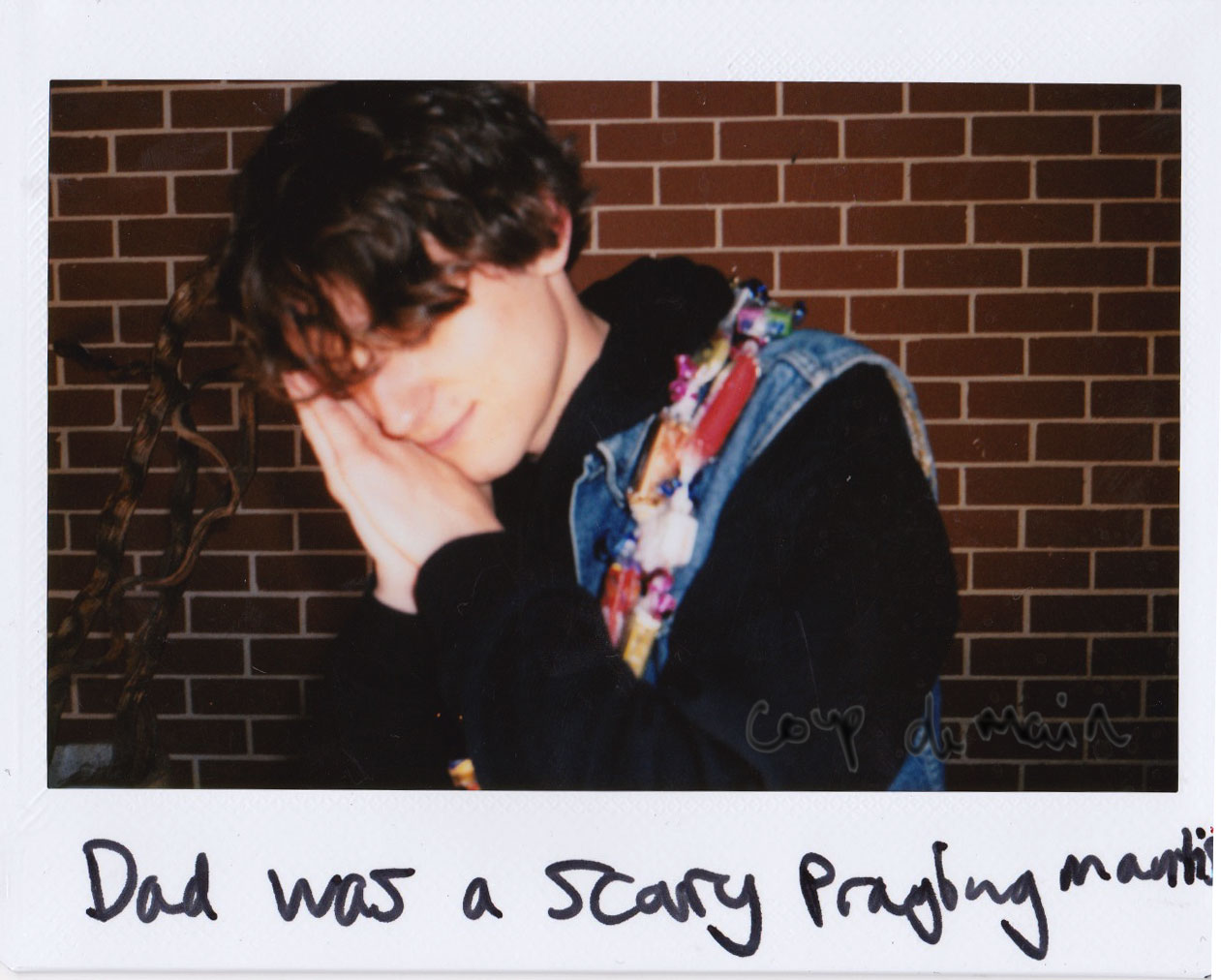 CDM: You’re hosting an art exhibition next month featuring art done by Hugh - I assume that you’ll be showing Gengahr’s single covers and album artwork, but will there be more of your art on display too?
HUGH: There’s not that much room, it’s quite a small place.
FELIX: It’s four artists.
HUGH: Four artists, in a little room. But yeah, I’m gonna show the covers and an extra thing that no-one’s seen.

CDM: Rad. Have you always been painting?
HUGH: Yeah, I went to art school, and then dropped out to do this. But I learnt something in the year I was there. I try and do it when I’ve got some time off, it’s a nice counter-balance to music.

CDM: And you Felix, also do graphic design and storyboard your music videos? Is it important to you as a band to have that creative control over your art-direction and visuals?
FELIX: Yeah, I think we can do it, so we do. I feel that it’s important that you do everything you can, because that’s what creates the identity of bands. The more you’re doing yourself, the stronger and the clearer that is. I think it’s quite fortunate that between ourselves we can be fairly self-sufficient, although there are other bands that do stuff similar to us, it’s definitely something that we find important. We’ll continue to do the art and the visual side for as long as we can. 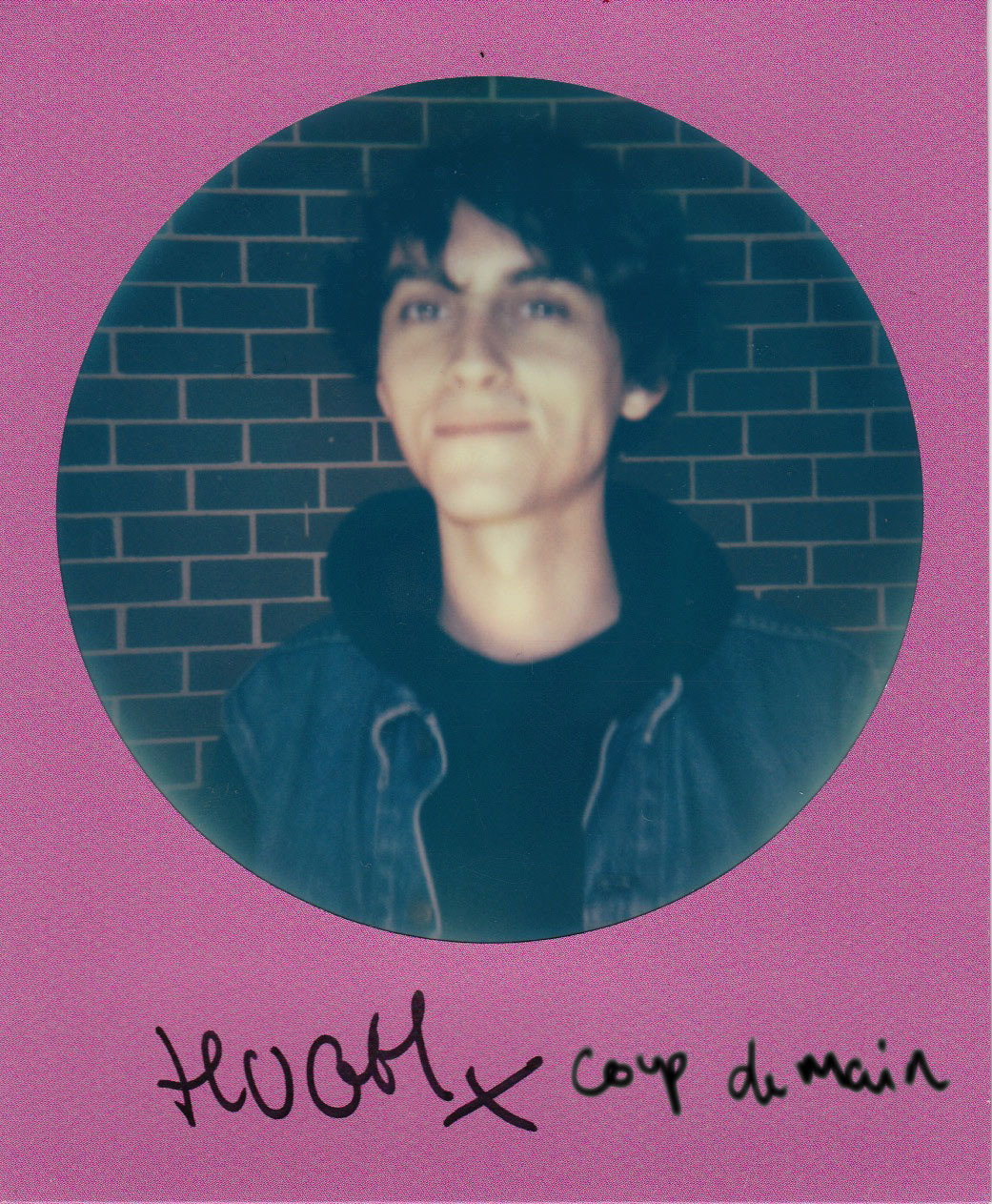 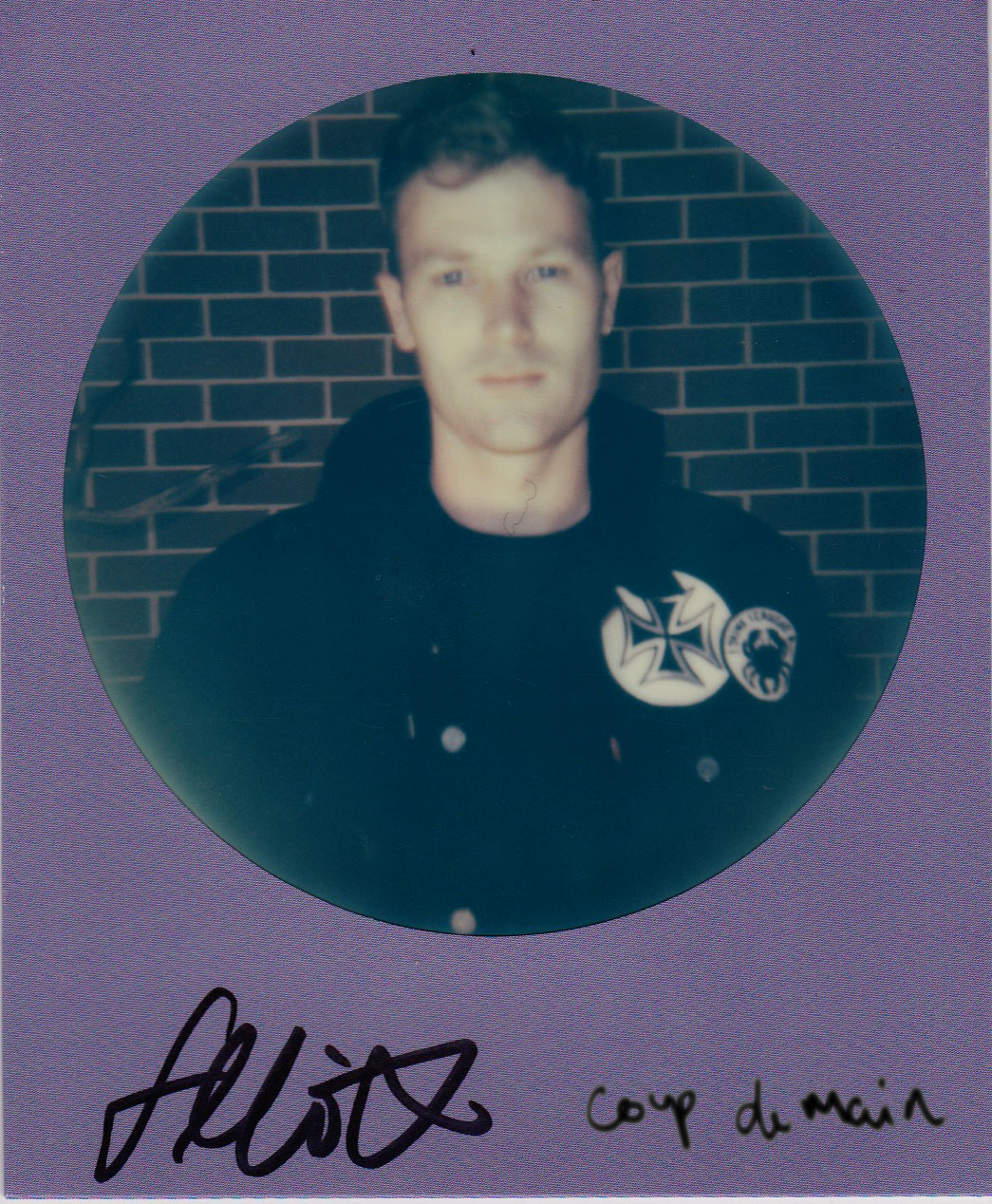 CDM: What do you think is the difference between a good song and a great song?
FELIX: For me, a lot of the time it’ll be probably the story. I think you can have a good song, and it can be a catchy pop song, but if it’s a great song, it also means something, if it affects you. There are loads of good pop songs written, but I think the great ones are the ones that have a bit of a story to them.

CDM: If G.E.N.G.A.H.R. were an acronym, what would each letter stand for?
FELIX: I’m totally dyslexic so this is gonna be terrible. How do you spell Gengahr?
HUGH: Great.
FELIX: Eat. Naughty. Gravity. Horses. Regular.

CDM: We’ve also interviewed Wolf Alice for our new issue, so we were wondering if you have a favourite Wolf Alice song?
FELIX: Mine is ‘Blush’ - their best song, I tell them that all the time. They should sack the rest, they’ve gotta do more like that. 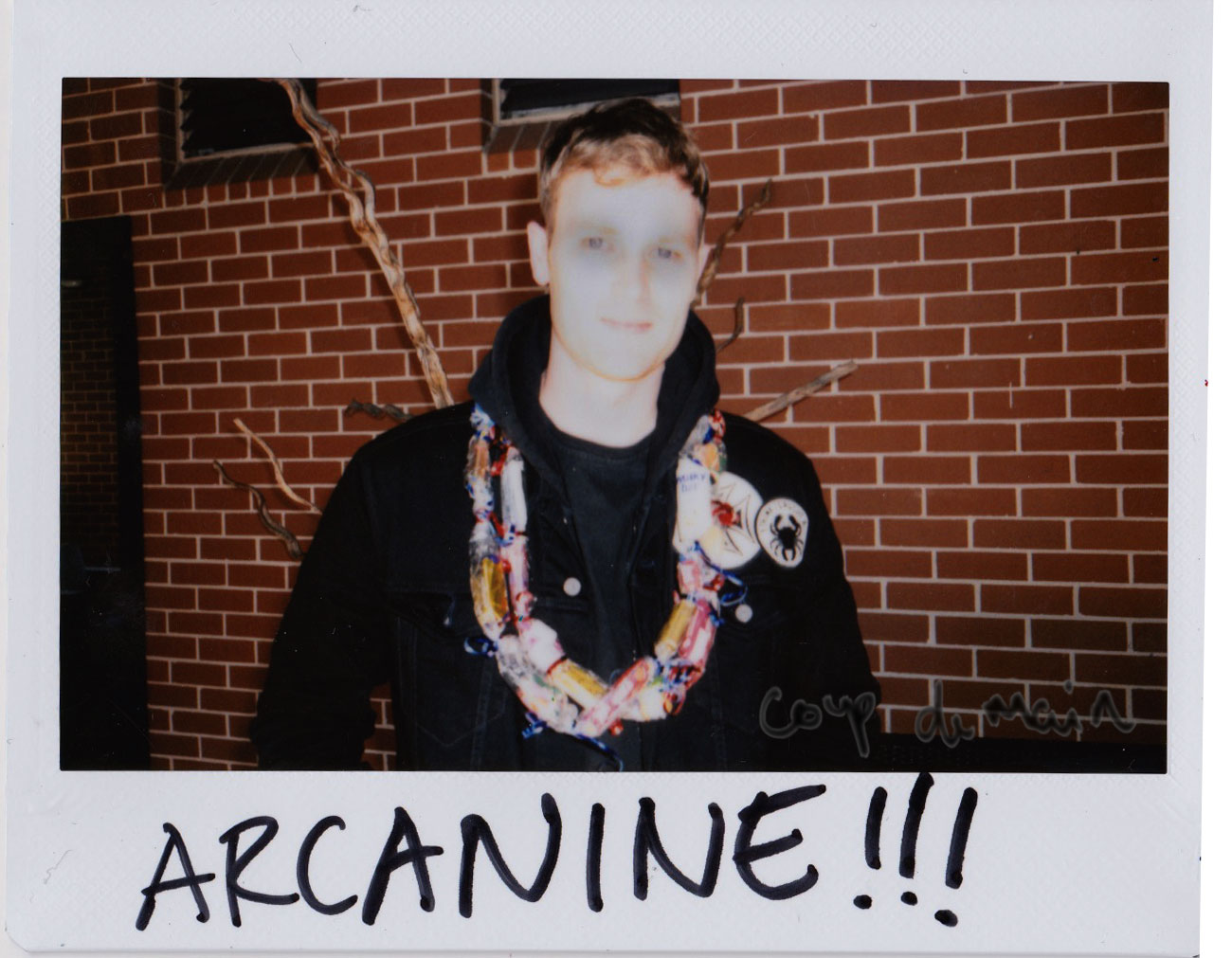 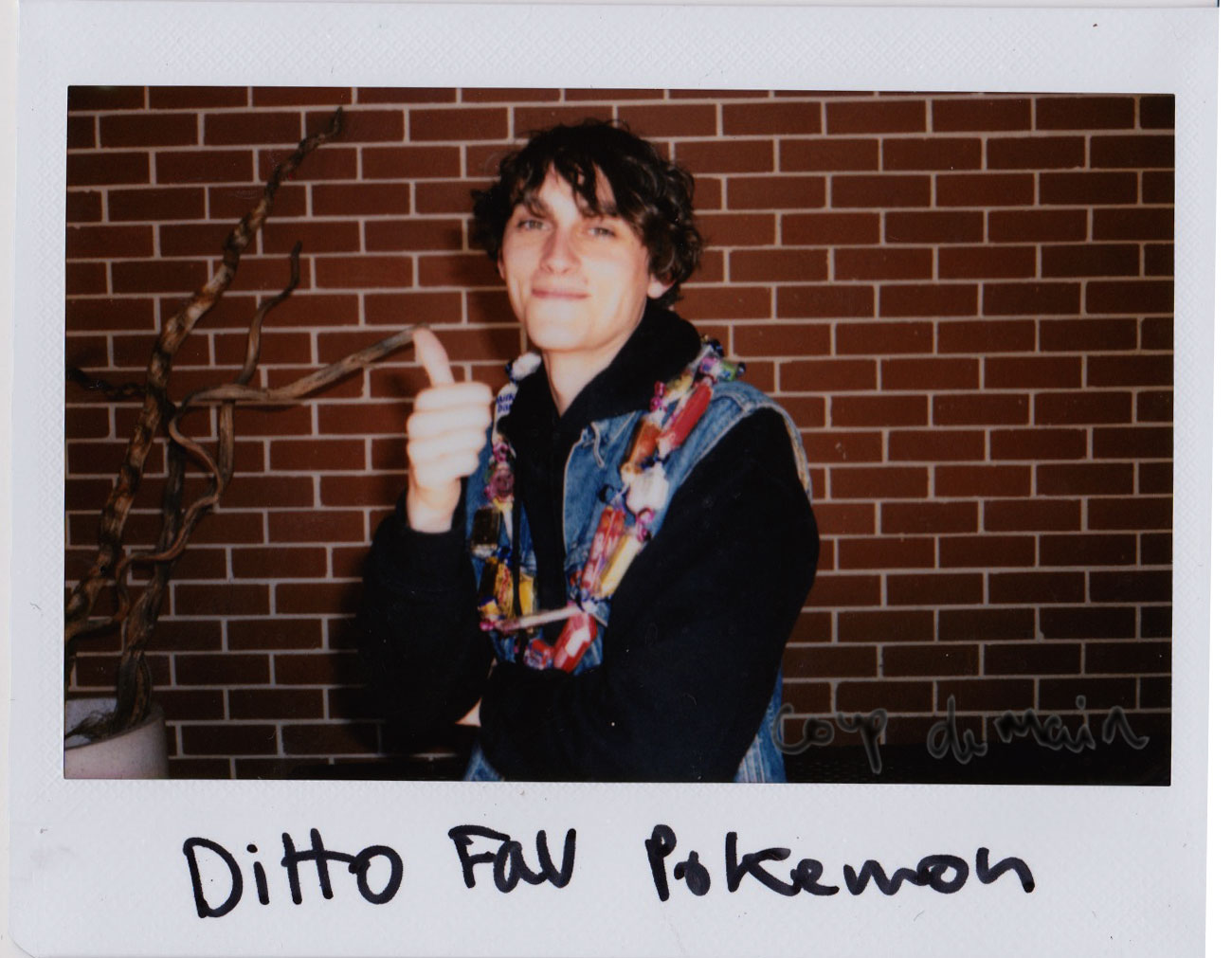 CDM: Has anyone ever thrown a Poké Ball on-stage at you?
FELIX: Not yet, but we do get some quite hilarious puns.
HUGH: We’ve been given some Pokémon related toys.
FELIX: They always get given to John [Victor] though. I don’t even think he likes Pokémon really.
HUGH: I like it more.
FELIX: Yeah, I like it more than him - I don’t even really like it.

CDM: What are the top five things on the Gengahr bucket-list?
FELIX: In Australia, right now, we’ve failed - I haven’t seen any Koala bears or any sharks. That was all we wanted to do.
HUGH: I haven’t been bitten by a deadly spider.
FELIX: I haven’t seen a single spider.
HUGH: Our sound guy is terrified of spiders and we really wanted to scare him, but we haven’t even seen them. Are there deadly spiders in New Zealand as well?

CDM: New Zealand is quite safe. We don’t have deadly snakes or spiders.
HUGH: Even more reason to go.
FELIX: Lots of sheep.
HUGH: Hobbits.
FELIX: My fave. 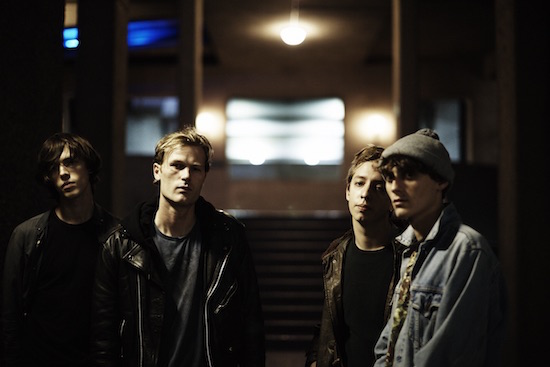 Gengahr’s album ‘A Dream Outside’ is out now - click here to purchase it via iTunes.

Watch the ‘Fill My Gums With Blood’ music video below… 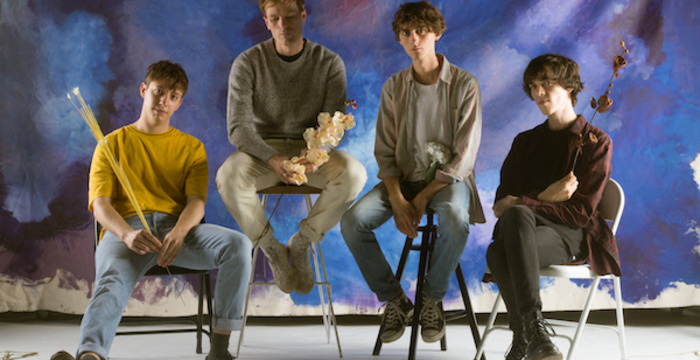 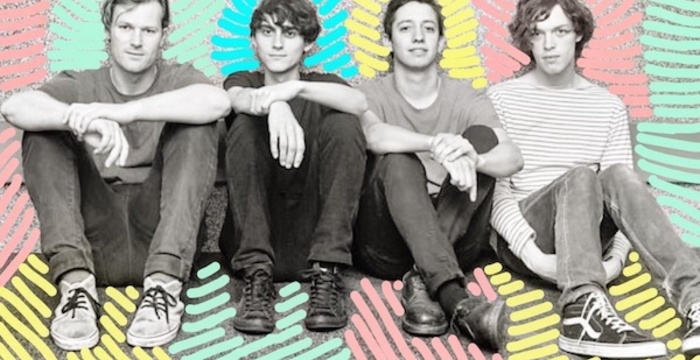 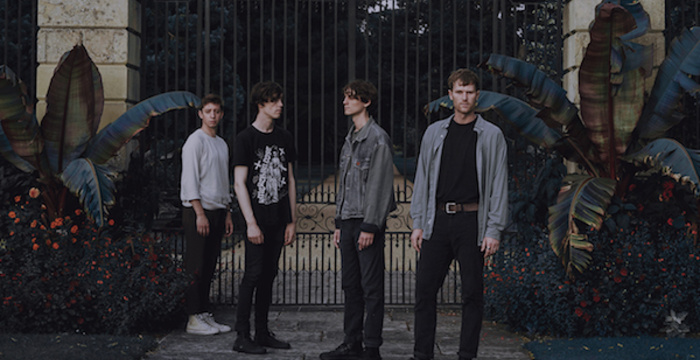 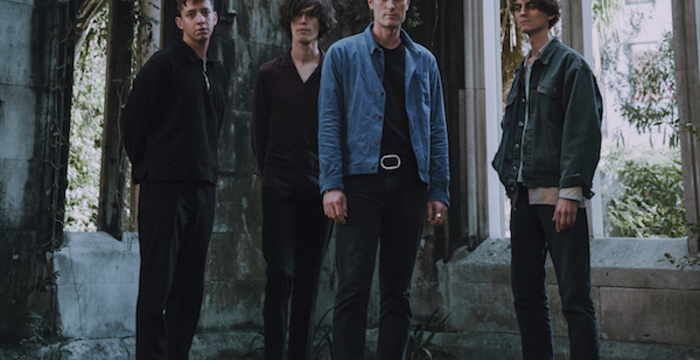 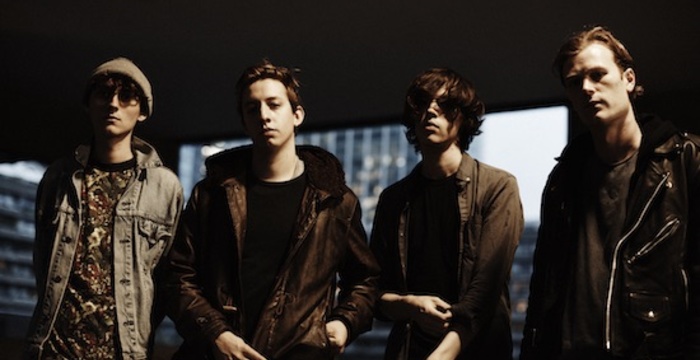 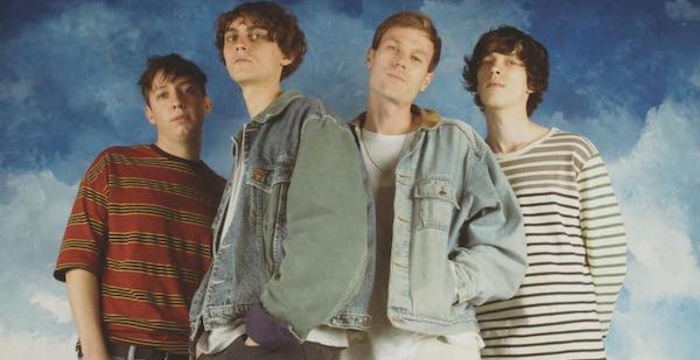 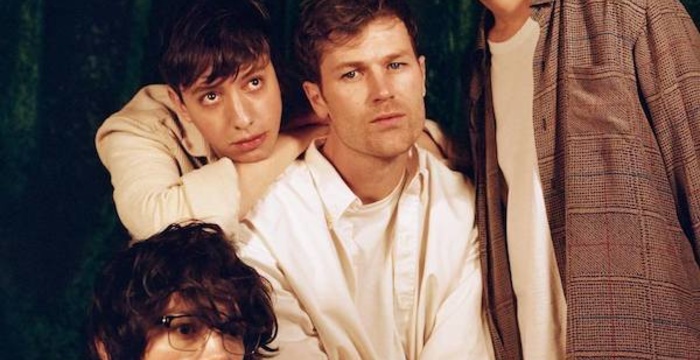 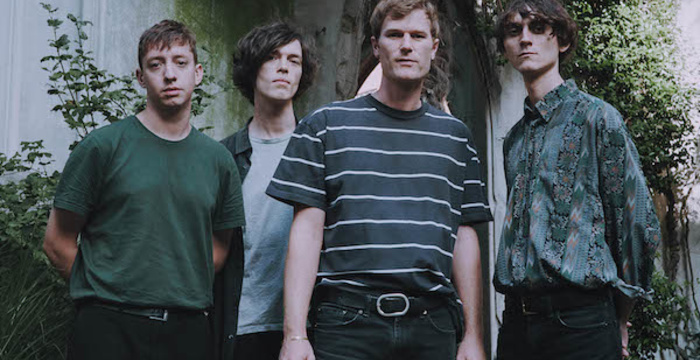 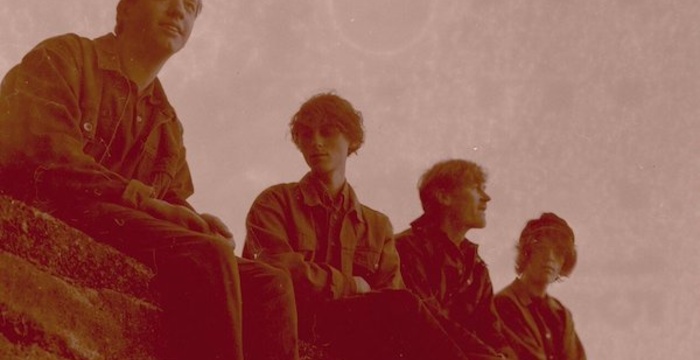